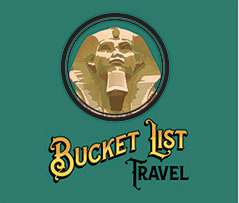 Wonders of Cairo: Private for Takia

Wonders of Cairo: Private for Takia

Bucket List Travel is excited to help you explore the wonders of Cairo!

• The Great Sphinx of Giza

• Photo opp on a camel at the Pyramids

• Colossus of Ramses in Memphis

• The Citadel and Alabaster Mosque of Muhammed Ali

• Church of Saints Sergius and Bacchus, believed to be where Joseph, Mary and Jesus rested after their journey into Egypt

The cost of this trip is $525 per person, based on four guests in the group.

This does NOT include airfare to and from Egypt.

Your space will be secured when we receive a deposit of $125 per person. Upon receipt, this deposit paid is nonrefundable.

• Between 100-61 days before your arrival date, entire amount paid except nonrefundable deposit.

You should plan to fly in to and out of Cairo, Egypt.

You should plan to arrive at Cairo International Airport on Sunday, Oct. 24 , 2021.  Afternoon and evening arrivals are best.

Your return flight from Cairo International Airport should be scheduled for Friday,  Oct. 29, 2021.

We will schedule your airport transfers based on your flight itinerary information.

These are all included: airport transfers, tours, admissions, transportation, and lunches on the four tour days.

You will need money to pay for:

You will need more money if you choose any of these optional offerings:

· Optional Sound and Light Show at the Pyramids:. $45.

· Optional entry inside the Great Pyramid – 360 Egyptian pounds (about $22)

Merchants in the souks do not take credit cards, so you will need cash for purchases in the marketplaces. (Larger stores and shops for larger/better quality items such as rugs, jewelry, papyrus, alabaster, and essential oils DO take credit cards).

I recommend bringing a bunch of one dollar bills (15-20) to use for tips and small purchases.

This program is active. Walking is done over uneven surfaces and steps. Expect most days of sightseeing to require three to four hours of walking as well as a considerable time standing. Our vehicles have set drop off and pick up points, that result in extra walking to and from the sights. The pacing is active as many sites are included.

As you get off the plane and head towards passport control, you will see our airport agent holding a sign with your name on it. He will help you get your Egyptian visa, lead you through VIP passport control, through baggage claim, and then escort you to your hotel!

Annie Emanuelli
4 reviews
Hi - I'm Annie, the founder of Bucket List Travel! Travel is my life! I left a 30+ year career as a corporate marketing exec to start my own travel business, taking people to Bucket List locations! I'd like to take you somewhere you've always dreamed of going. Stop dreaming, start packing!
Read more

IS
If you are thinking of going to Egypt, I highly recommend Bucket List Travel. My husband and I have just completed a private tour. We were their first booking since the pandemic started, and we truly loved the experience. Annie arranged a great itinerary tailored to our preferences,, and Yasser, our guide couldn’t have been better. He is a scholar in Egyptology who is passionate about his country, its history, culture, architecture, food and all things Egypt. He is also fun to be with and bends over backwards to give his guests the best experience possible. We normally travel independently, but are so glad we decided to see Egypt this way. We would not have gotten half as much out of the trip without the background and understanding provided by Yasser. I would recommend using Bucket List Travel without hesitation.
Read more
By Iris S for Egypt Private Tour: Iris Newman Stone on 11 Apr, 2021
DW
This trip was beyond my expectations. A wonderful experience. I would highly recommend traveling with Bucket List Travel.
Read more
By Donna W for AUG 28-SEPT 9, 2019: Bucket List South Africa! on 12 Sep, 2019
MG
A very special thank you to our guide to beautiful Egypt and its’ amazing history, Yasser Omar. In 10 days, he quickly became part of the family and a friend forever. Thank you to Annie Emanuelli who helped arrange this magical trip for us and is highly recommended. The people of Egypt are such a wonderful and welcoming culture. It was quite the compliment to be welcomed over and over to Egypt, “welcome to Egypt miss”, with a smiling request for a picture with them from time to time. The history of this country truly ties all that you know about the world together. From measurement and numbering systems, to the medical devices we use today, you find these influences carved on the walls in ancient Egypt dating back 4000+ years ago. Having traveled for years, this bucket list trip was truly set apart by the amazing service of this team. Highly, highly, highly recommended. If you’ve been looking for a travel company or unsure of how to best see Egypt, this is the company you want to go with. Service and experience can not be matched.
Read more
By Mary G for Discover Ancient Egypt - Private for Guzman Family on 22 Jun, 2019
KH
Annie Emanuelli always provides great trips and pays attention to every detail. Her trip to Africa is jam packed with great experiences, memorable moments and tons of wildlife sightings. She choose great places to stay and excellent restaurants, a trip I will treasure!!
Read more
By Kristy H for MAY 29-June 10. 2019: Bucket List South Africa! on 12 Jun, 2019

NG
I just returned from a once in a lifetime trip to Cairo organized by Bucket List Travel. Annie took care of every detail of planning, and it really showed when I got off the plane and was taken care of from start to finish with the greatest care. Our guide Yasser was kind, professional, knowledgeable, and funny! He went above and beyond to ensure every need was met and we got the most out of each day in Egypt. I always felt safe and loved experiencing local life and culture. I plan to grab my friends and book again with Bucket List Travel!
Read more
By Noel G on 05 Feb, 2020